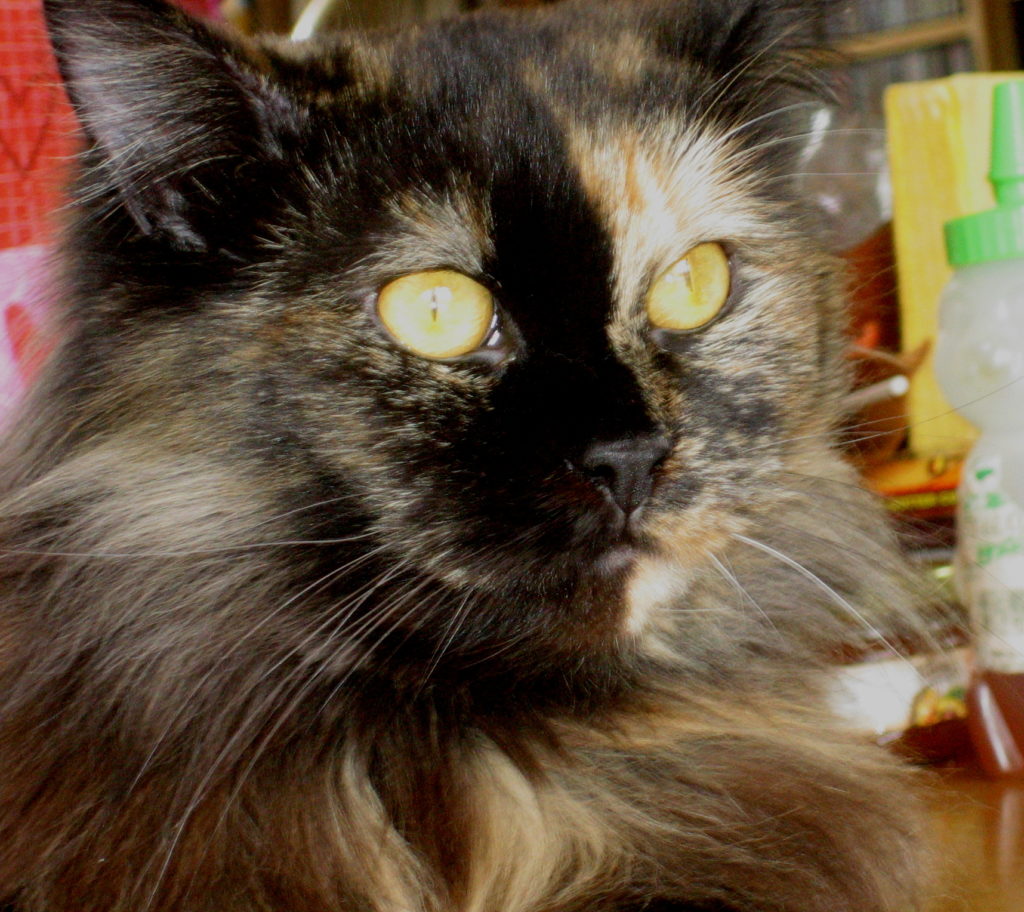 We originally discovered Harley when we went to see her son Rhubarb at Cause4Cats in Lebec, CA. We almost left without her, but I asked at the last moment if they had any other Maine Coons. They said they had his mother. Dennis and I looked at each other and thought, “Oh my God! We almost broke up a family!!!”

When they brought Harley to us, I INSTANTLY fell in love with her beautiful, colorful face. She was then, and to her dying day, the gentlest, sweetest cat I had ever had the privilege of  having in my 45 years as a cat owner.

Harley had a strong amount of Maine Coon breed in her genetic makeup, but she was not a purebred. I do not condone breed purity as it causes a lot of suffering to the animal if there is a genetic flaw in the breed – such as Persians whose faces are so scrunched up they have severe sinus problems. Maine Coon purebreds suffer from major hip problems later in life. Personally, I will NEVER support such show-bred purity as an excuse to allow the suffering of such beautiful animals, PERIOD.

“Mutts” (not purebred) are stronger physically and of normal, even sweet temperament. Harley was and her son Rhubarb is, exceptional examples of this.

The day we brought them both home, we discovered she was sneezing and acting listless. A vet visit told us she had a cold, so they both spent their first two weeks locked in a bathroom downstairs away from the roommates other three cats so they wouldn’t get sick. I felt bad for a long time after that they had put their trust and love in “choosing” us and we were repaying it by shoving them into a cold bathroom to wait out Harley’s little cold. During their “time out” they were showered with love and affection – and understanding when their escape attempts occasionally succeeded. They both were fast little things and very slippery!

Harley was a tiny little thing – delicate and so beautifully colored! Another check up at our regular vet confirmed the cold was gone, but we had seen evidence she had worms and that was confirmed. A shot later, she passed them quickly, and Dennis started giving her his company’s probiotic blend of acidopholis called Megadophilis. Suddenly she gained 1 1/4 pounds – a lot for a tiny little lady!

Her purr was so soft one could not hear it at first. We had to put our fingers on her throat to feel the very faint vibration of it. Once she gained a little weight and started thriving on all the love and spoiling, it steadily grew louder over the years until one could be a few feet away and hear it. It was proof to us that she was happy and loved us and her new home.

Harley was the kind of mom who, though Rhubarb quickly grew to outweigh her by nearly 10 pounds, she still kept him in line. Quite often he would get on top of her and preen her, then start biting her through she was completely passive until he started biting the back of her neck. She wouldn’t put up with that, sliding out from under him, and running away. She would hiss and snarl only if he cornered her and we weren’t around to save her, at which point he would back down. Sometimes he wouldn’t, at which time Dennis would usually come to her rescue. I remember with amusement how Rhubarb he was trying to claim the top of the cat tree, he would attack her from the lower level and she would bat him back if and until he tried to actually jump up there with her, then she would get tired of it and “WHACK!” him but good! She was undefeated in defending her “throne”.

She loved to “colonize” either of us whenever she saw the opportunity. If we were sitting or laying on the couch or in bed, she would come up and lay on our chest, snuggling close. We’d rub noses other, then she’d settle down and lay on us until we reluctantly got up or she got bored and left.

This site uses Akismet to reduce spam. Learn how your comment data is processed.